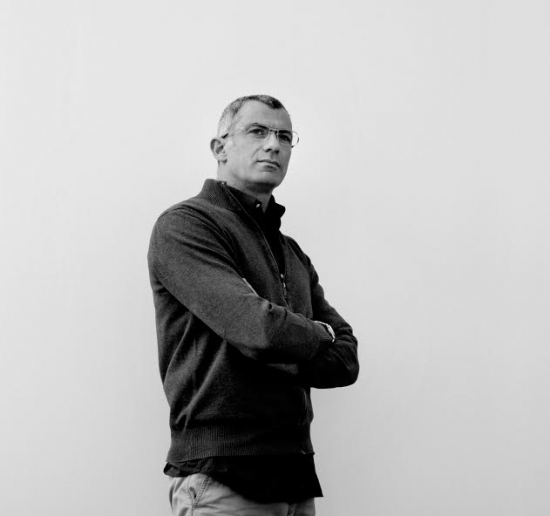 Arik Levy is an Israeli artist working in Paris, perhaps best known as a sculptor and designer, who first gained widespread acclaim in the 1990s for his exquisite Rock series. This achievement would have been career-defining for many, but for Levy, whose creativity and use of media has never remained stagnant, it was merely a point of departure.

In addition to his work in the fields of sculpture and design Levy has distinguished himself as a set designer, an industrial designer, a photographer, a director, and a video artist—and has even created hi-tech clothing and accessories for fashion firms in Asia. He casually evades characterization, and, when asked, refuses to delineate between his various creative pursuits (at any given time his projects number in the hundreds). Instead he refers to himself as a “feeling artist”—as Levy is known to say, creativity is “an uncontrolled muscle.”

All of Levy’s work is colored by this untethered, multidisciplinary approach. He even brings this fresh and uniquely compelling perspective to bear on his sculpture and design, which he produces in his dedicated studio, and on behalf of his firm, L Design (founded in 1997).

His work has won dozens of design awards and is collected in public and private collections all over the world, notably in The Centre Georges Pompidou, Paris, The Victoria & Albert Museum, London, The Fond National d’Art Contemporain, Paris, The Israel Museum, Jerusalem, The Museum of Modern Art, New York, and in The Art Institute of Chicago.

We recently featured the artist at our booth at the fifth annual Collective Design fair. We are proud to introduce him to our clients, and to carry some of his exceptional work here in New York.

FractalCloud is a light fixture composed of a profusion of intersecting LED strips that hang from a raw, exposed transformer. The piece is a marvel of versatility—it can be astonishingly bright, or dimmed to an ambient glow; and hung alone, as a pair, or as one of a bunch in an elaborate display of brilliant, tangled light. Its effect depends entirely upon where it is hung, by those items that surround it, and by the interior in which it plays a part.

While extraordinarily adaptable, FractalCloud has, nonetheless, an unmistakably strong character. The fixture’s presence is strong enough to remain distinct no matter its location.

This character is made up of the piece’s compelling and inherent contradictions. Very few fixtures convey opposing qualities quite as seamlessly as does FractalCloud. By pitting a visceral, chaotic tangle of wires against the elegant symmetry of a cloud of light, Arik Levy has created a piece at once harsh and soft, both ominous and inviting. 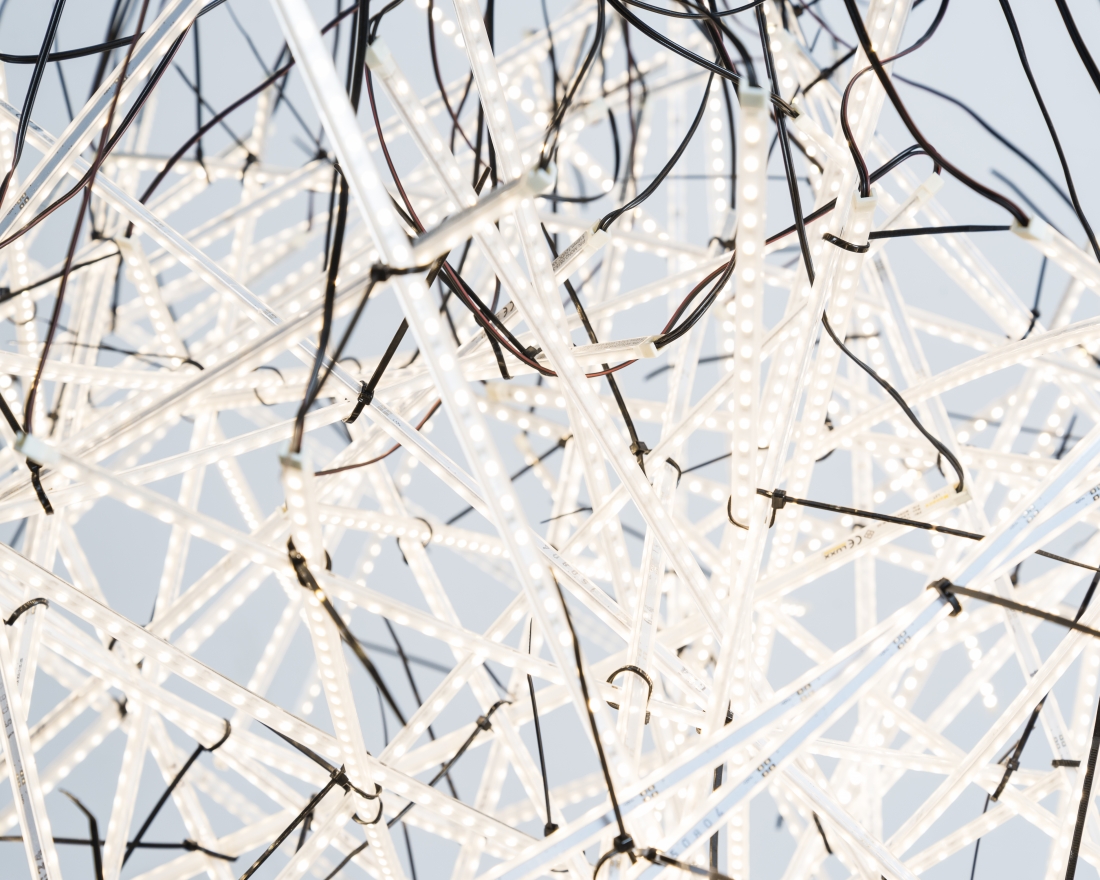 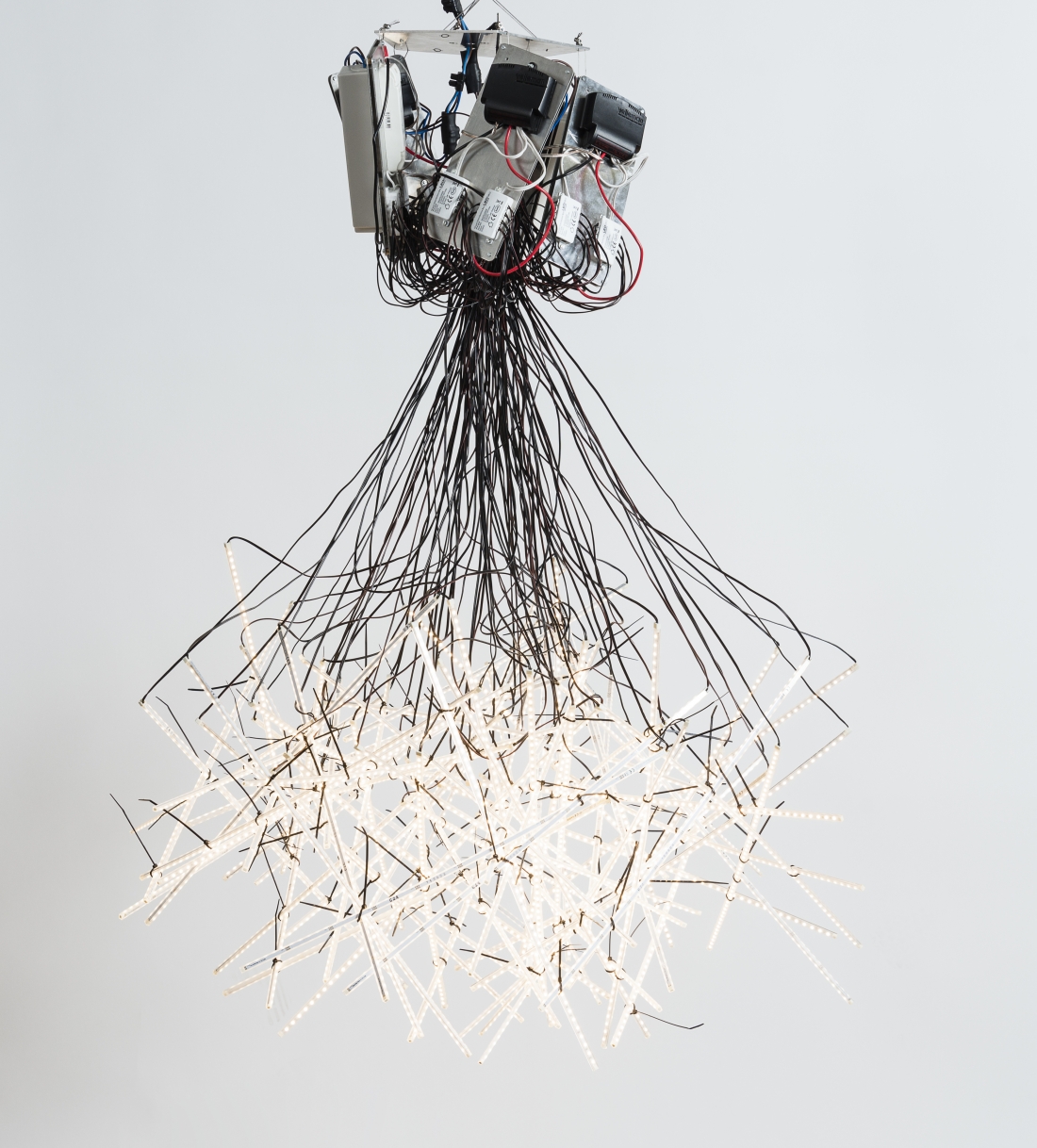 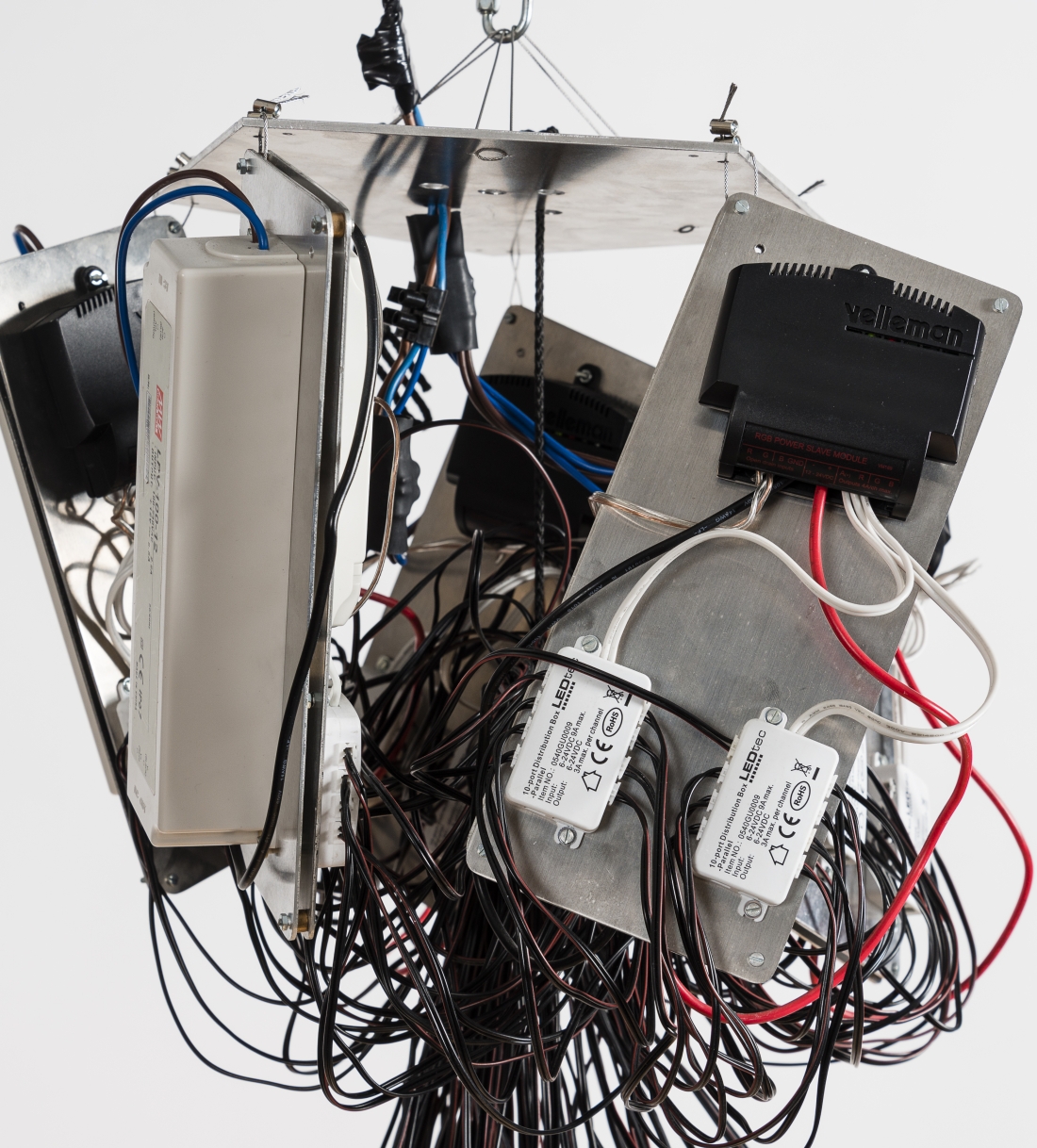 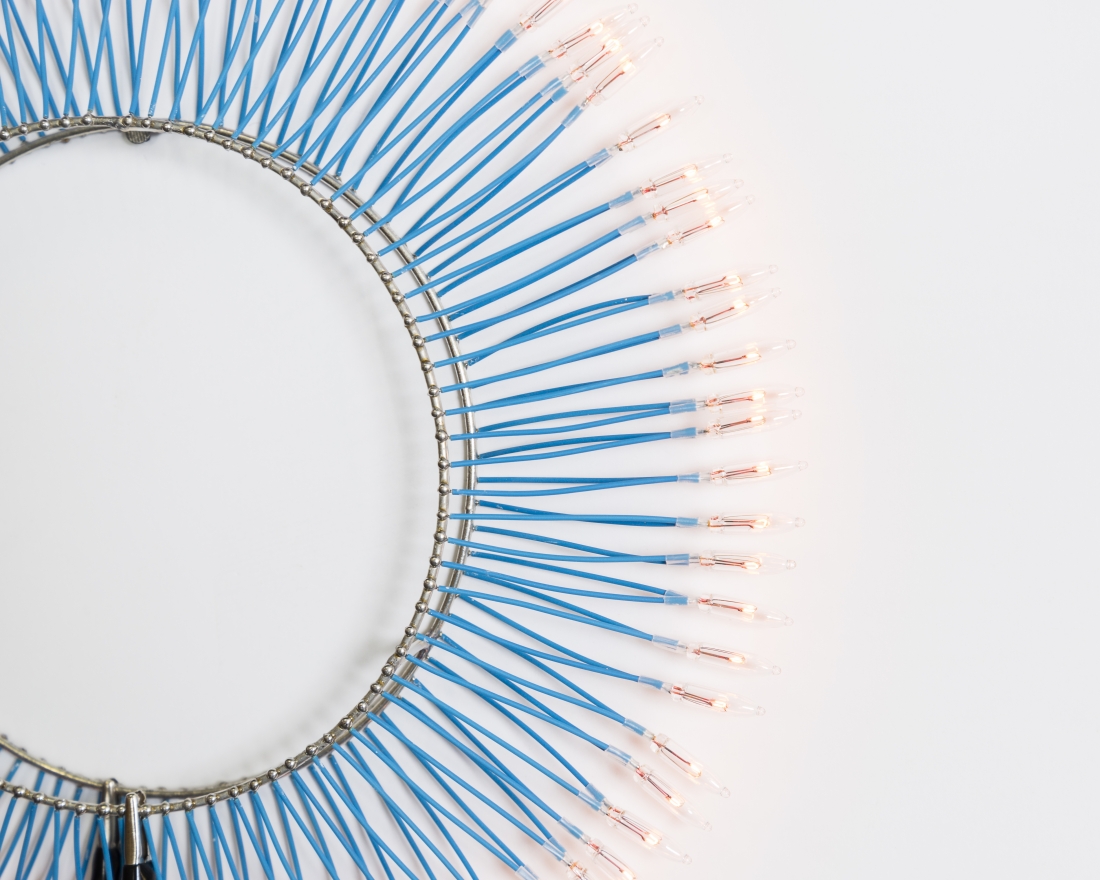 Arik Levy’s wall mounted light sculpture is every bit as fresh as when he introduced it more than twenty years ago.

While presented in a much smaller package, Shine possesses the remarkable potency of FractalCloud. In fact, its size lends the sconce a certain power singular to items of great density—the piece’s diameter accentuates, rather than diminishes, its already intense elements of phosphorescent blue and burning yellow.

Up close, Shine becomes something entirely different than what it is from afar. The electric yellow ring is revealed to be 94 firefly bulbs, the primary blue circle a series of crisscrossed, exposed wires. Levy sets our initial understanding of the piece (as a bright layering of warm and cool light and color) against a more intimate understanding of its component parts—visually arresting, yet coldly arranged, hardware.

Shine’s detailed structural components are as important as is the appearance they affect, and to understand this underlying musculature is to fully comprehend the piece's genuine beauty. 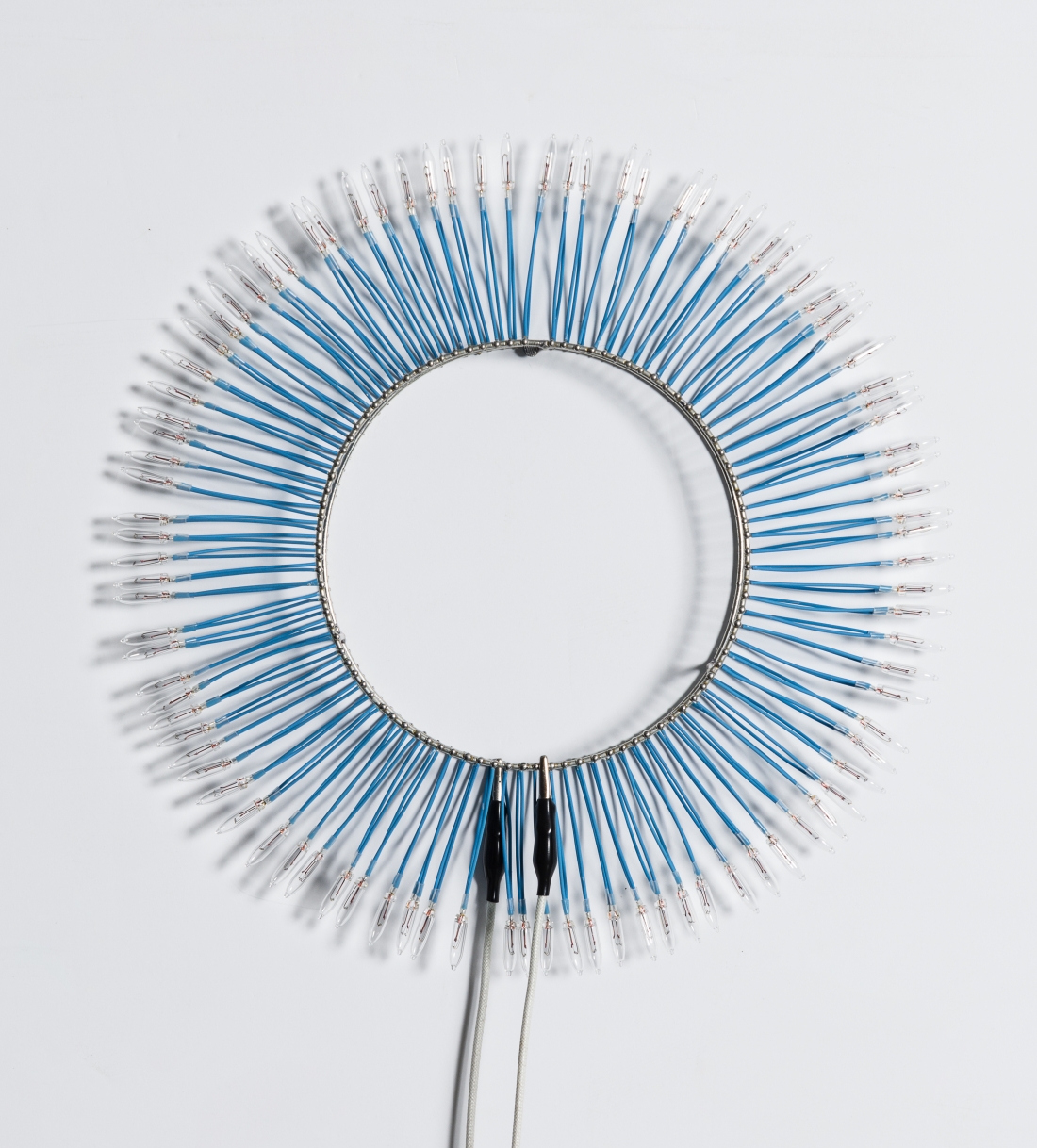 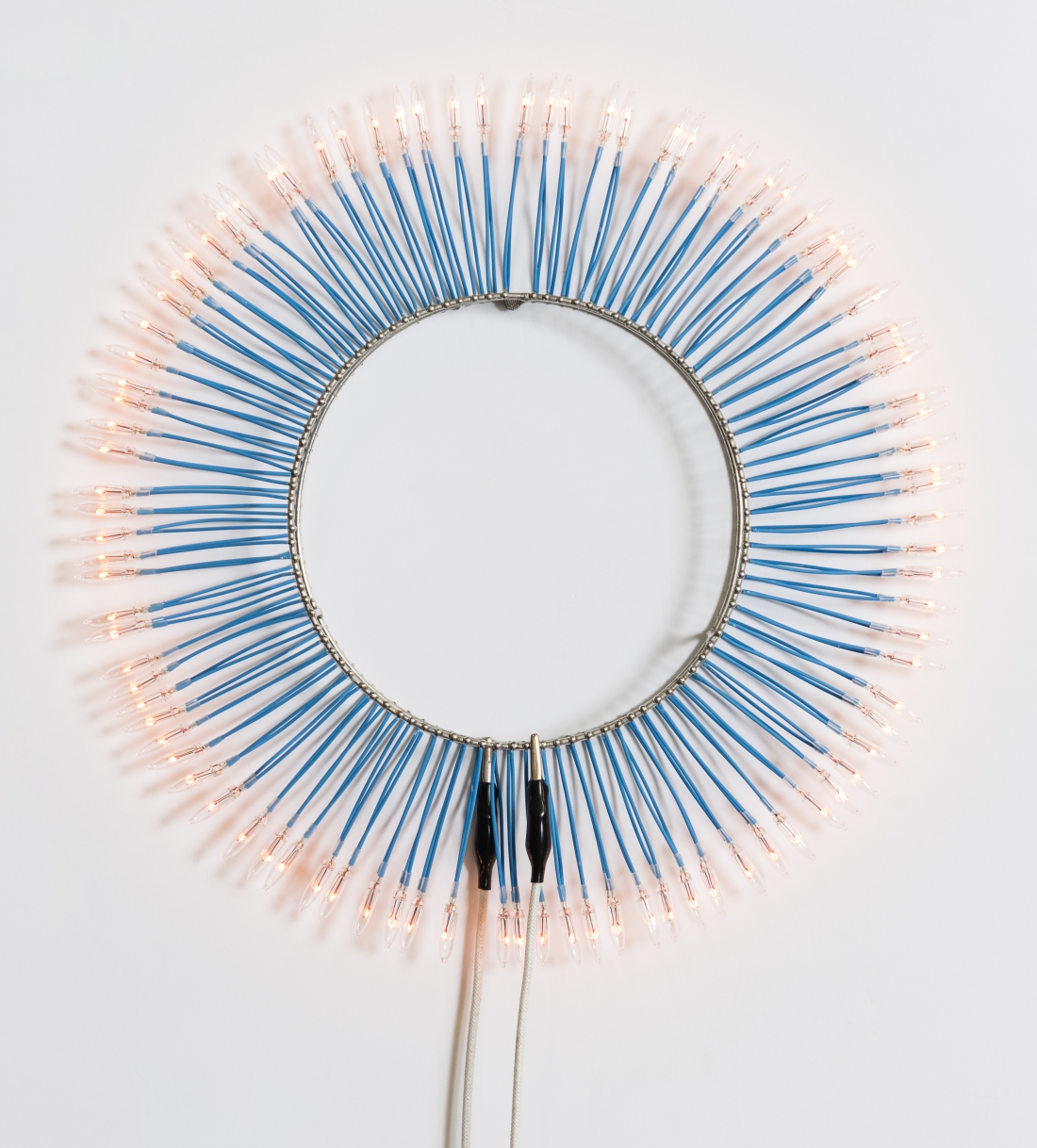 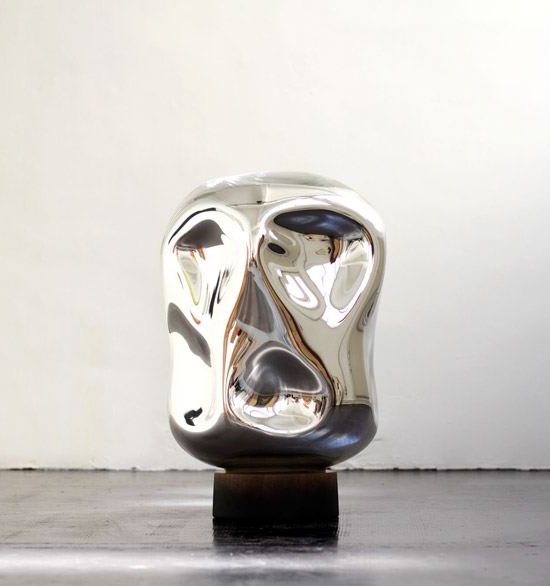 SolidLiquid, available both as a sculpture and a smaller vase, is a work made of blown glass that toys with our conception of what is natural. As with his famous Rock sculptures, which vary in size, shape, and conception, Levy’s piece is the natural rendered surreal. Its wobbly, polished surface reflects the work’s environment in a half-trustworthy way, demanding its audience reassess its relationship with the world as it is commonly understood.

Perhaps something more of its purpose can be found in an interview conducted by the cultural entrepreneur Jérôme Sans, in which Levy said:

“I remember when I was a teenager in Israel…surfing and getting into the water just before the sun rose was a beautiful sensation, as the light hit the water on a low angle and it visually turned into a solid. Later on, through many years the interest I had in light and lighting was about the magic that light brings to our everyday life. It is about the shadow actually, about revealed architecture and perspective, where spaces open when others are closing as the light moves away. It is also life, energy, warmth and harmony.” 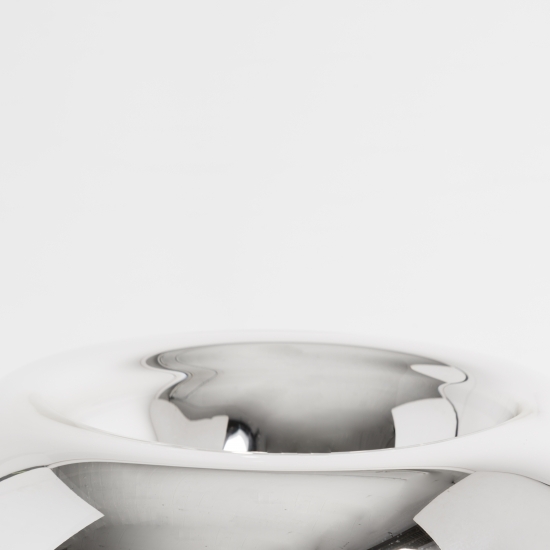 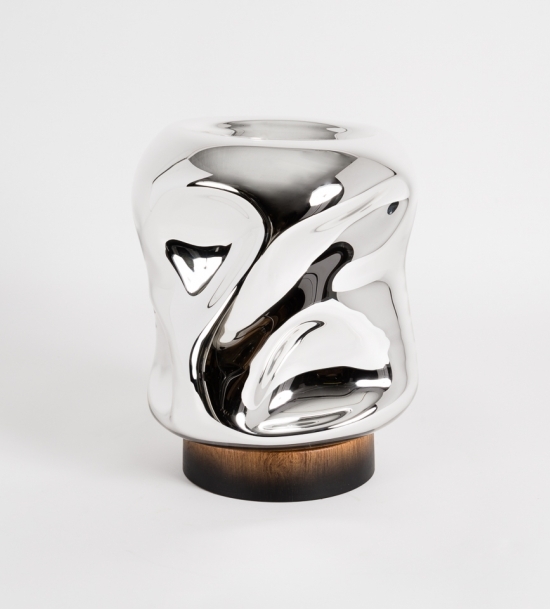 Like his famous Rock series of sculptures, SocialSkin has a polished surface that reflects the piece’s environment, thrusting scrutiny back on the audience, and demanding the audience reassess its assumptions about its relationship with art.

This scrutiny is even more pointed in Socialskin, due to its shape, which is that of a conventional house. The work has no other qualities but what its mirrored sides reflect. By generating images of everything surrounding it, and by thus disappearing into its environment, the work raises questions concerning the self (which a house, as a home, naturally represents): What is it to be a part of a community or society? Where do we begin and where does the image we project out into the world end? Are we true to ourselves, or do we do what society expects of us? And what really, after all, is the difference?

That the audience literally sees itself in the piece (on the reflective facets of the house) makes these questions all the more intimate and immediate. 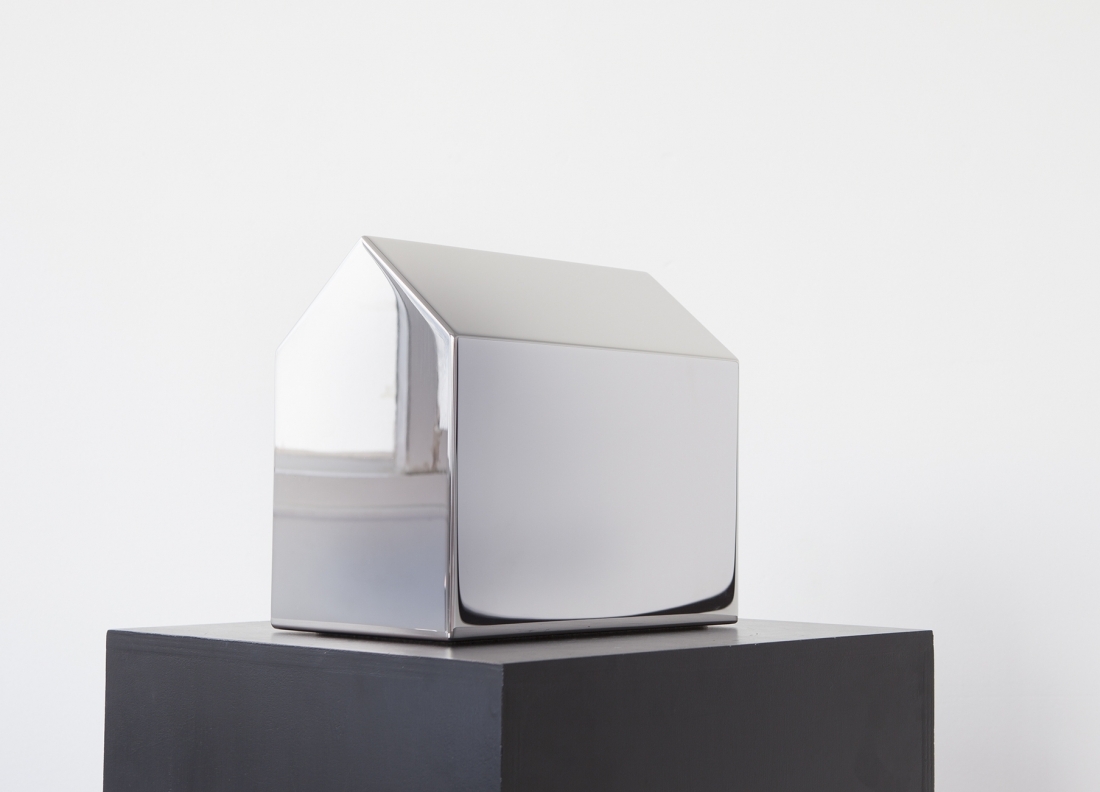 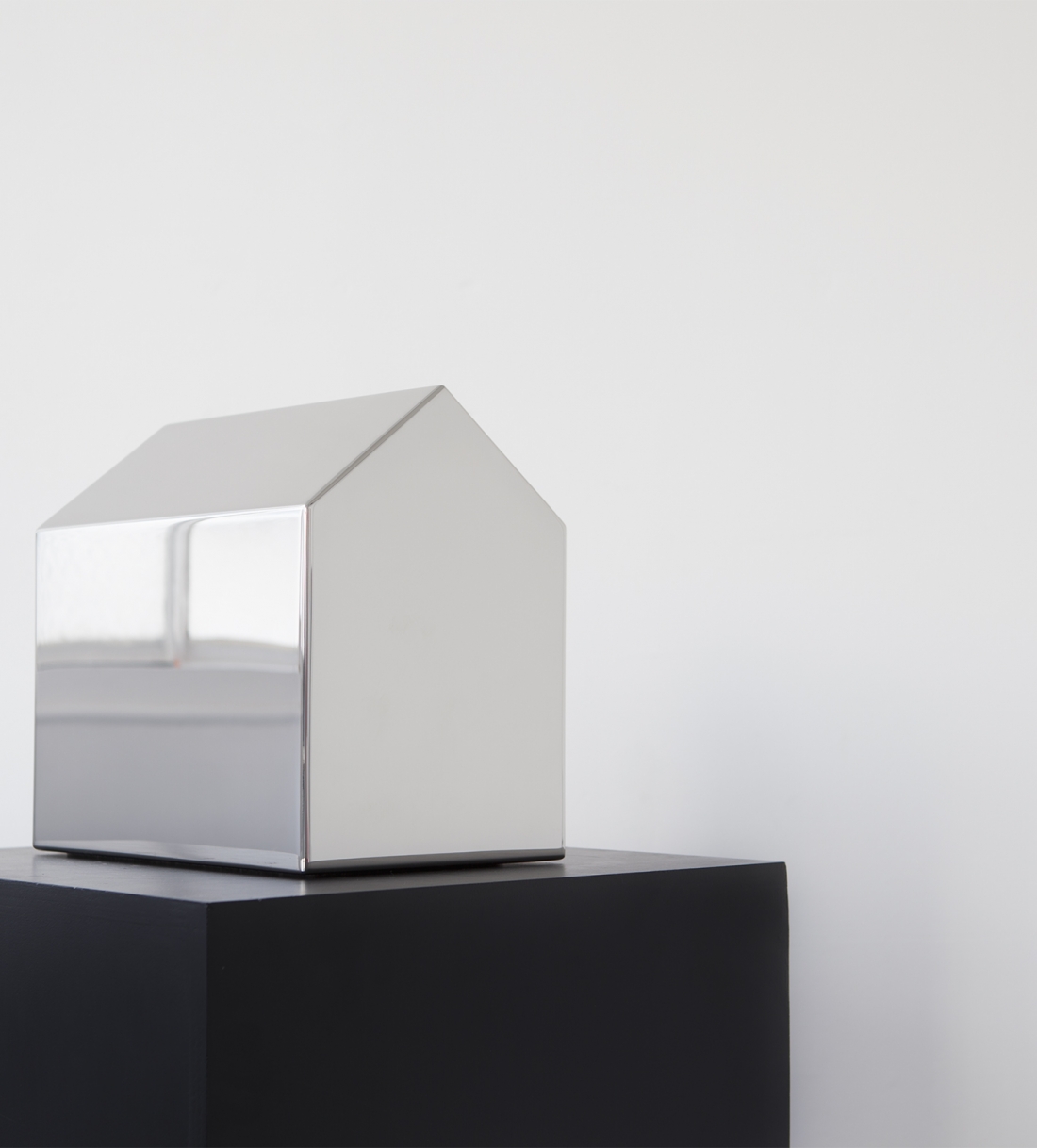 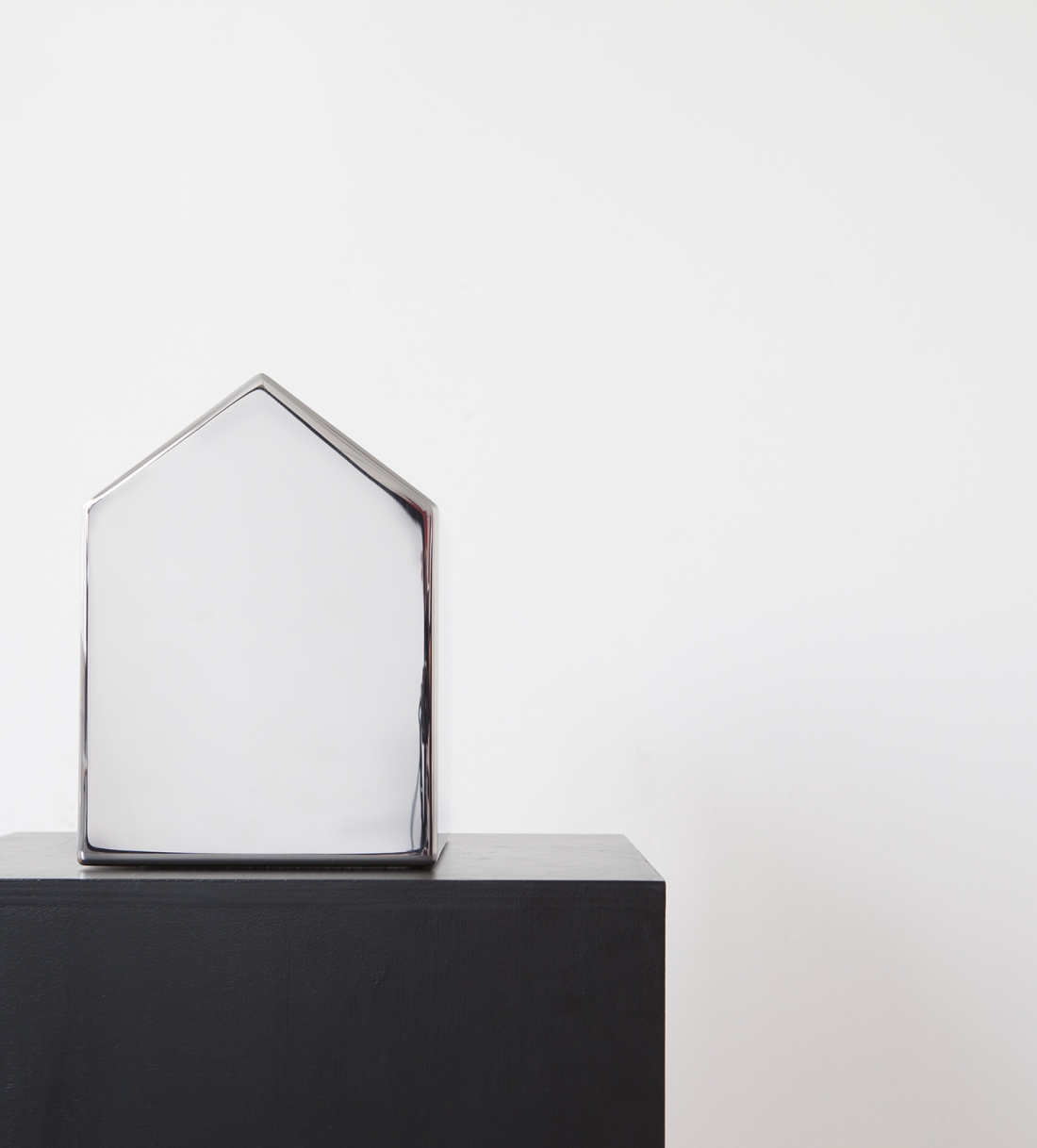 The above are available through Maison Gerard. To inquire, please email home@maisongerard.com.

To see more of Levy's work (some of which is pictured below) visit http://www.ariklevy.fr/