After their collaboration at the 2016 Paris Biennale des Antiquaires and TEFAF's debut in New York, Carolle Thibaut-Pomerantz and Benoist F. Drut pair up once again to explore the affinities between art and design—and between past and present—in elegant decors for the contemporary lifestyle.

Carolle Thibaut-Pomerantz, trained as an art historian, deals in the decorative arts, with a specialty in fine vintage wallpapers from the XVIII century to the 1950’s.

She has pioneered the rediscovery of this unique mural art from, known as “Papiers Peints” and is known as the specialist in this field.

Bi-cultural, Franco-American, she is based both in Paris and New York.

As a private dealer, she advises collectors, designers and corporations both in Europe and the United States.

Many of her rare vintage papers have been acquired by major museums such as The Metropolitan Museum of Art, The Philadelphia Museum of Art, The Museum of Fine Arts, Boston, The Art Institute, Chicago, the Musée des Arts Décoratifs in Paris, and the Kunstgewerbe Museum Staaliche in Berlin.

Carolle Thibaut-Pomerantz also does appraisals and lectures on this particular subject.

She is a member of the Compagnie Nationale des Experts and the National Art and Antique Dealers Association of America. 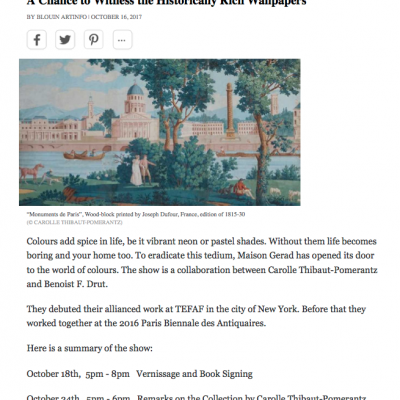