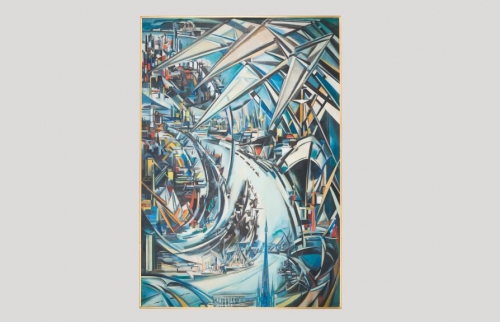 Two-dimensional art of the twentieth century was defined by movements, and none is more recognizable than the highly stylized Cubism. With its vibrant colors and exaggerated forms, the movement captured the imagination of a generation. While Picasso defined the movement in some regard, his French contemporary Reynold Arnould created many staple entries in the genre.

Arnould was born in 1919 in the northern French region of Normandy. At the age of nine and already painting, he was awarded an exhibition at the Galerie Legrip in Rouen. Continuing to impress, Arnould would enter the École des Beaux Arts de Rouen only the following year. Upon turning eighteen, the budding artist was admitted to the École des Beaux arts de Paris. While studying there in 1939, he won the Prix de Rome, a scholarship founded and funded by the French government to send students with proven artistic potential for Italy to two years of study.

After finishing his studies in the wake of the chaos of the Second World War, Arnould set out to establish himself within the Paris art scene. He began exhibiting at the Salon d’Automne and Salon des Tuileries, attracting a significant amount of attention. His first American show was at the Passedoit Gallery in 1945, and would clear a path for him to establish his reputation on the other side of the Atlantic. By 1949 he was director of a Dallas art school but was called back to Europe to stage an overhaul of the museum in Le Havre.

Into the 1960s, Arnould became increasingly integral to the cultural heart of France (as part of his capacity as curator of all museums in Le Havre from 1952 to 1965). In 1961, he inaugurated the Maison de la Couture in Le Havre, at the invitation of the Ministry of Cultural Affairs. In 1966, Arnould became curator of the national galleries within the Grand Palais in Paris, overseeing the creation of those galleries.

During this time, his artistic output did not cease. Arnould continued to exhibit at the Salon de Mai between 1949 and 1962. Beginning in the mid-1950s, the painter’s work steadily became less figural and took on more commonalities with avant-garde movements sweeping postwar Europe, not least of all Italian Futurism and Cubism. Arnould was fond of deep colors, and his subject matter swung from abstracted female figures to allegorical landscape and still life scenes. Known for painting on a monumental scale, Arnould developed a reputation as a muralist. Painting large scenes was something which would place him into the collections of the Grand Palais and Palais des Consuls, Rouen.

Appreciated in his own time and well after, Arnould’s work can be found both in public collections and in a thriving private market. Retrospectives were launched at the Galerie de France in 1969 and at the Grand Palais in 1983 (posthumously). Arnould’s painting today rests in the private collections of the Musée d’Art Moderne in Paris, as well as provincial museums in Le Havre, Rouen, and Besançon (eastern France). Arnould died in 1980. 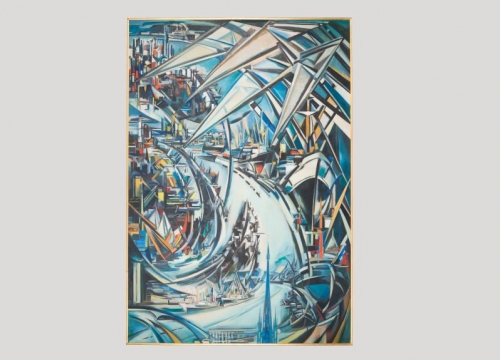