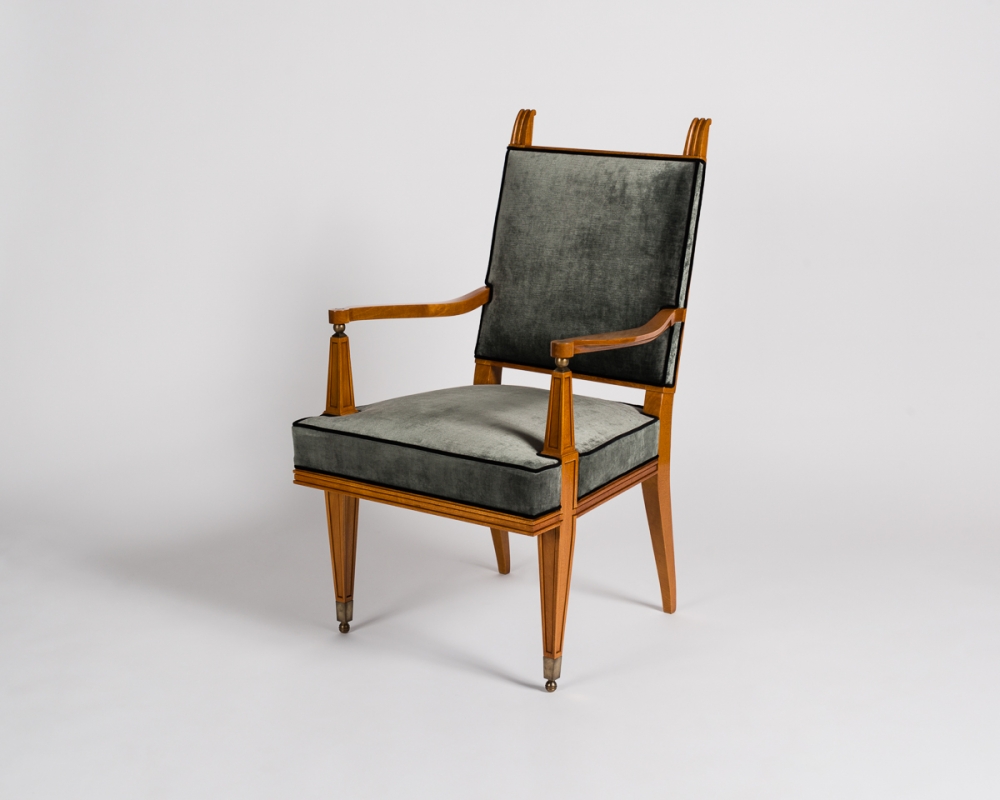 Like many notable careers in 20th century design history, Lucien Rollin’s got off to a very early start.

At the age of thirteen he was admitted to the famed École Boulle, where he studied under its director, imminent ebenist and designer, André Fréchet. He went to work immediately upon graduating in 1923 and, trading in the influence of one design titan for that of another, took a job as a draftsman for Emile-Jacques Ruhlmann. Rollin would work for the legendary designer for two years, contributing to his definitive exhibit at the historic 1925 International Exposition of Modern Decorative and Industrial Arts.

At the age of nineteen Rollin switched course once more and enrolled in the École des Beaux Arts to work with yet another famed designer, Michel Roux-Spitz. At twenty-three, in 1928, finished with his second four year program, Rollin established a workshop and showroom on the Rue des Perchamps and made his debut at the Salons des Artistes Décorateurs. This debut was so impressive that Rollin was taken as a member and shown yearly thereafter.

Apart from his teachers, Rollin’s initial influences were the most celebrated of his peers; and the artist’s early output, like the work of Jean-Jacques Adnet, Andre Arbus, and Jean-Charles Moreux, was as traditionally French as modern. Rollin’s work, however, even in its earliest, most impressionable stages, is distinct from that of these other notable designers in its lack of ornamentation. While he occasionally worked with famed metalsmith Gilbert Poillerat, Rollin generally favored uncommon woods (like zebra, palisander, and amboina) and relied on intricate inlays and grain juxtapositions for embellishment.

Rollin traveled to the United States in 1932. The designer was keenly aware of the modern innovations in American design and driven by a growing curiosity about architecture (a curiosity that would fully consume him later in life). He met with Frank Lloyd Wright, with whom he was enamored, and gleaned what he could from a design culture that was—by comparison to his own—unmoored from tradition.

Rollin returned to Paris to participate in the International Exhibition of Modern Decorative and Industrial Arts, but his stay was brief. He was back in the U.S. in 1934 on behalf of the French Government, which wanted him to scout the Century of Progress Exhibition in Chicago and develop ideas for later use—both in the Paris Exhibition des art et Techniques of 1937, and then in the French pavilion in New York’s 1939 World’s Fair, where Rollin would fill several show rooms.

While in America he met with W&J Sloane, a name then famous in New York interior design. The firm hired him to design an apartment in their 5th Avenue store later that year. The work solidified Rollin’s reputation in the U.S., and by the late thirties Marshall Fields, a gallery in Chicago, carried his furniture, and he had been hired to a number of interiors, notably those of the Bullock's Wilshire Building in Los Angeles.

His time in America was a watershed experience for the young designer, an experience that led him to distance himself from the grand and voluptuous designs of his celebrated teachers and peers and the traditionally French aesthetic that characterized their work. The more time he spent in America, the more modern his furniture became. His furniture would, from the mid-thirties on, be made in sleeker geometries, with fewer flourishes, and, increasingly, of non-traditional, industrial materials.

When he returned to France Rollin was awarded the Salon des Artistes Décorateurs from the French Président Lebrun, and the grand prix at the international Exhibition of Brussels. He designed the state rooms of the ocean liner, The Normandie, the City Hall in Aubusson, and a living room for General Delattre de Tassigny's offices in the Hôtel des Invalides. He also created furniture for the Elysée Palace and the French Embassy in Brussels on behalf of the Mobilier National.

In the late forties Rollin began to work full time as an architect and all but abandoned design and interior décor. Architecture would remain his primary passion until his retirement in the 1980s. He died in 1993.