An Italian folding screen in the Liberty Style (the Italian equivalent of Art Nouveau) by the Florentine furniture makers Girard & Cutler who earned the Gold Medal during the Turin Exposition of 1902. The piece is in carved maple, walnut, mahogany, and satinwood with carved floral arches above an inlaid nautical scene and is signed in inlaid monogram.

This screen is a prime example of the influence of the Japanese taste that was so fashionable in Western Europe in the second half of the nineteenth century and served as a launching pad for skilled merchants, such as Siegfried Bing in Paris and more notably Arthur Lasenby Liberty in London. "Liberty Style," the Italian equivalent of Art Nouveau, was named after his London store Liberty & Co, where he specialized in selling ornaments, fabric and objects from Japan and the Far East. While the piece exhibits Oriental elements, it also shows the influence of styles ranging from Medieval German to fifteenth-century Italian art, especially in the carved details.

This screen was featured in the Prima Esposizione Internazionale d'Arte Decorativa Moderna (First International Exposition of Modern Decorative Arts) in Turin, Italy in 1902. The main purpose of this important world arts exhibition was to highlight original modernist works, and it was influential in spreading the popularity of Art Nouveau design, especially in Italy.

During the exhibition, the screen was among the most admired works and was the most reproduced in the magazines of the time. The Florentine creators' unmistakable Belart style so struck the international jurors that they unanimously awarded them the gold medal for their presentation. 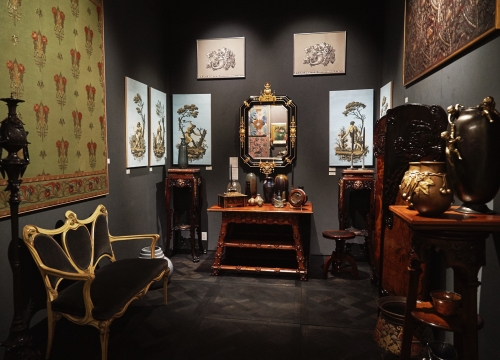